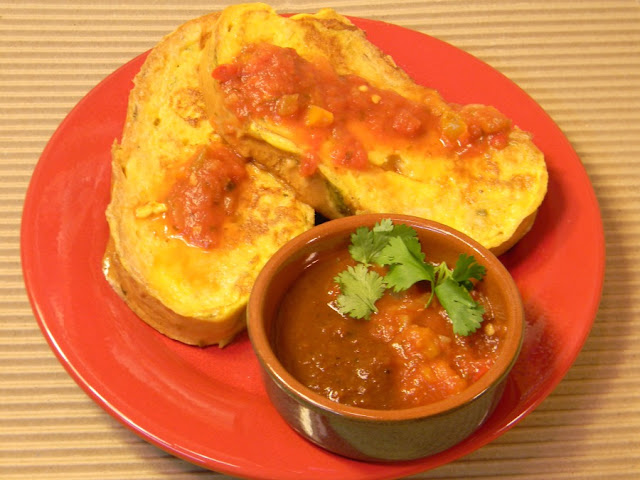 Jim gave me a call ~ he'd decided it was his turn to cook dinner and said he wanted to make French toast. I grimaced at the thought, but said okay. Then he told me that a friend had given him a loaf of day-old jalapeño bread from a local bakery and he was going to make a savory version. Now he had me on board!

He had some ideas, but said he wanted some technical help and we ended up creating it together. It was great for dinner but would be equally delicious for breakfast. Think huevos rancheros flavors. Many specialty bakeries and some supermarkets offer jalapeño bread. Great Harvest, which has many national locations, makes one and also makes "Popeye bread" with red pepper, spinach and Swiss cheese which would work very well, too. If you can't find anything like this, just add some minced jalapeño chiles to your egg mixture and you'll be there.

The toast was particularly good with the chipotle based salsa on the left, but also good with a basic, store-bought salsa. Just depends what you like!

Combine eggs, onion, salt and pepper in shallow bowl and whisk completely. Add milk and whisk until combined.  Heat a cast iron skillet (preferably) or a non-stick skillet on medium high heat. Soak bread slices in egg mixture until saturated, about 20 seconds per side. Add a dollop of butter to the pan, swirl until sizzling, then place two to three slices of soaked bread in pan, depending upon how much room you have. Fry until browned on one side, flip and brown on the other. Serve with salsa and cilantro leaves on the side. Sour cream is nice, too.

Gayle
I am the owner of Buttered Lips Cooking - I teach people to cook in community classes and in their own kitchens, emphasizing their tastes and goals. I'm passionate about my food and living, love experiencing new flavors, places and people. If you agree, SMILE!